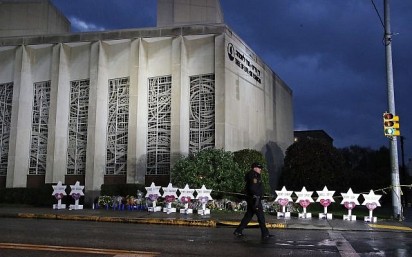 On Saturday morning at the Tree of Life synagogue in Pittsburgh Jewish
families gathered for worship on the day of Sabbath. Robert Bowers, a
46-year-old white man with no previous convictions and unknown to
authorities, entered the synagogue armed with assault rifles and shot
and killed 11 people, injured 6 more, and was heard spouting antisemitic
rhetoric as he did so.

The authorities have classed this as a “hate crime”, while others are
calling for this violent, racist mass killing to be considered an act of
terrorism. What we know now, is that for months
Bowers was using various social media platforms to spew racist,
antisemitic, hateful comments and conspiracy theories; he would re-post
nazi media; and was sharing anti-refugee sentiments with his
followers. Gab, an alternative social media platform popular with white
supremacists and neo-nazis, was frequently
used by Bowers – who posted on it one final time before perpetrating this
horrific killing.

Saturday’s mass shooting of Jews during worship
was nothing short of a senseless act of hate and violence. When fascists
say they should have the right to espouse their hateful ideas they do not
intend to debate us in the market place of ideas. When nazis say they
want to kill Jews, or ethnically cleanse their neighborhoods, or send
migrants and refugees back where they came from; they mean they want to
use violence to impose their will.

Our thoughts are with the families and friends of those who lost their
lives on Saturday, and our Jewish comrades.

Check out our old wordpress which still has a lot of great and relevant content!